Let’s brush up on your crypto lingo. 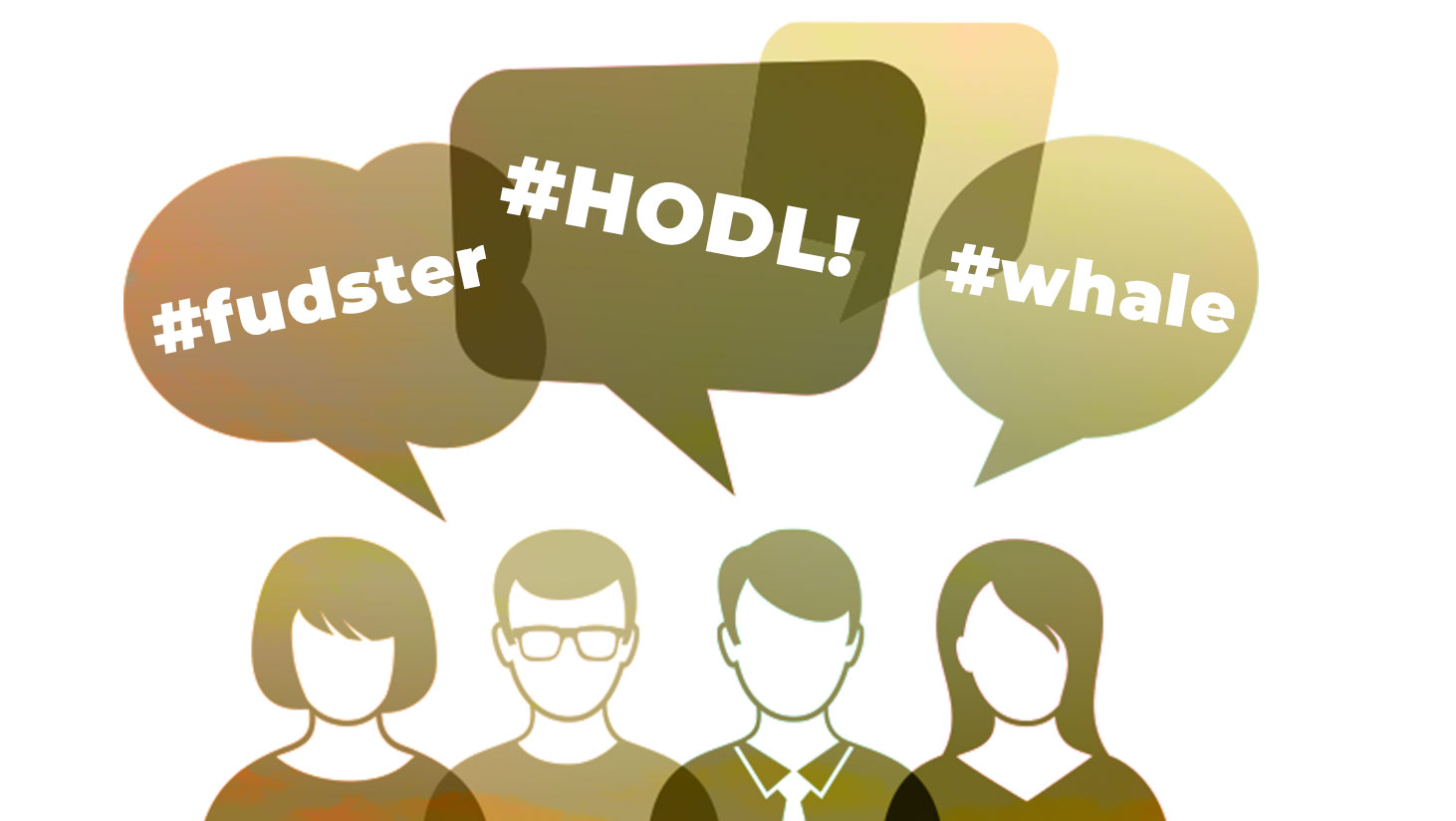 Aa
Address
An online location (specified as a random arrangement of strings or numbers) where cryptocurrency can be sent to or received from.

Airdrop
The distribution of cryptocurrency by the creator of the currency free of charge or at low prices to increase popularity and use.

All time High (ATH)
The maximum price ever achieved by a cryptocurrency throughout its trading history.

All time Low (ATL)
The lowest price ever hit for a cryptocurrency throughout its trading history.

Arbitrage
To buy and sell different cryptocurrencies for profits based on differences in prices for currency.
For example: If one Bitcoin gets traded for 2 SAFCOIN and 2 SAFCOIN are worth more than the Bitcoin, it would be arbitrage to trade and cash in the SAFCOIN for profit.

ASIC
Acronym for Application Specific Integrated Circuit. It is a type of computer chip that can be used to efficiently mine for cryptocurrency, often compared with Graphics Cards used for mining.

Atomic Swap
The exercise of cryptocurrency owners exchanging currencies at existing rates without buying or selling their holdings.

51% Attack
Sometimes a single person or a group of people can gain a majority share control in the hashing power of block chain network. Through singular or coordinated effort, this power can be used to halt, stop or change mining and transactions. When such an event occurs it is called a 51% attack.

Bear/Bearish
A term used to indicate that a cryptocurrency is losing value as reflected in its price. The word bearish is used to describe the general behavior of the currency as falling in price.

Bear Trap
Certain holders may dump their cryptocurrency into the market, causing prices to fall. This makes other holders sell their currencies as well which further drives down the prices. Those who initially sold their currency can buy back the extra currency at lower prices to draw up the prices and make profits through extra coins or the difference between the selling and buying prices.

Bid
The act of offering a price at which someone is willing to buy a specified quantity of cryptocurrency.
This is said to be a bear trap. Selling currency to drive prices down and buying back at lower rates for profit.

Bitcoin
The first cryptocurrency ever created. Invented by a group of individuals under the pseudonym “Satoshi Nakamoto”, it was the first instance of a peer to peer decentralized virtual currency.

Block
The sub-unit of a block chain recording a collection of transactions conducted with a cryptocurrency. A collection of blocks is called a blockchain.

Blockchain
A collection of blocks that records the entirety of collections of transactions conducted using cryptocurrencies.

Bull/Bullish
Used to refer to cryptocurrencies exhibiting price hikes. A cryptocurrency is bullish if it has exhibited price increases over a certain period of time.

Burned
When a currency becomes unspendable due to legislation, technical malfunction or the like; it is said to be burned.

Cold Storage
The exercise of keeping coins offline on flash drives or disconnected from the internet and access codes locked away. If you do not access your crypto wallet or have transferred coins onto a flash drive, you are said to have put you coins in cold storage.

Consensus
When a transaction is made, all nodes on the blockchain must corroborate the occurrence of the transaction. When all nodes agree, a consensus has been reached.

Cryptocurrency
Digital, encrypted cryptocurrency operating independently of banks. The transaction ledgers are maintained by a peer-to-peer connection of block chains that record and verify all transactions.

Dump
The exercise of selling large volumes of cryptocurrency simultaneously. Could be indicative of a bear trap.

Ee
Ethereum
A type of cryptocurrency

Escrow
When a third party agrees to hold the funds pending a transaction or transfer, it is said that the funds are in escrow. This third party is the financial intermediary between a buyer and a seller.

Ff
Faucet
Websites that offer cryptocurrency in exchange for connecting with them. These are usually scams.

Fork
When two different block chains of the same currency are created to work simultaneously. All transactions through a cryptocurrency are conducted on a single block chain. When a new block chain is created, this is known as a hard or a soft fork. Both block chains are run on the same network. SAFCOIN, for example, is a Litecoin fork.

Gg
Genesis Block
The first or the first few blocks on the block chain.

Hh
Hard Cap
During an Initial Coin Offering, the creator of the cryptocurrency may set a limit on the amount of funds to be raised through the investment brought in at the offering. No cryptocurrency may be created or offered beyond the limit.

Hard Fork
A type of fork in the block chain that renders all previous transactions from valid to invalid or vice versa. In order for a block chain to successfully take a hard fork, all the nodes on the block chain must transfer to the newest protocols.

Hardware Wallet
A physical device used to store encrypted cryptocurrencies. It is considered the safest storing method since it eliminates all possibilities of digital fraud.

Hash Rate
The rates at which your computer can create new hashes as entries on the blockchain. Each hash attempt involves creating a new block, recording cryptocurrency transactions and cross checking it against the rest of the block chain for double spends.

HODL
An acronym standing for “Hold On For Dear Life”. Originating from a typo found on a reddit thread on cryptocurrencies and adopted as a convention.

Kk
KYC
Acronym for Know Your Customers. A set of protocols to ensure regulation of financial instruments, entities and markets against fraud.

Mm
Mining
The exercise of maintaining transactions on block chains by creating new blocks and checking for discrepancy against existing records. Miners get SAFCOIN or other cryptocurrencies for lending a hand in maintaining records on blocks.

Nn
Network
The collection of all nodes assisting in the operations of a blockchain.

Node
A singular computer connected to the blockchain, assisting in the maintenance of the chain.

Proof of Authority
A private key, authorizing the holder to mine for cryptocurrency.

Proof of Stake
A mining reward scheme that caps miner rewards at the initial investment they made in the currency. Miners cannot earn more than the cap.

Proof of Work
Rewarding method used in SAFCOIN mining. Rewards are determined on the basis of whether and how much hash power was lent to process of recording transactions.

Ss
Scrypt
Pronounced as “ess-crypt”, it is a method of encryption that takes significantly higher hash power and is difficult to hack.

Software Wallet
As opposed to a hardware wallet, this type of wallet will also be used for SAFCOIN. It is a virtual storage where encrypted cryptocurrency is stored as alphanumeric strings.

Tt
Test Net
When a creator is testing the functionality of a new cryptocurrency it is done on a Test Net. It runs like a secondary blockchain, but has no impact on currency prices. It is a simulation of the Main Net which is the primary field of cryptocurrency activity.

Ww
Wallet
A unique code that serves as an address representing storage of cryptocurrency on the blockchain. The wallet address is public, however the access keys and the balance is private. It can exist as software, hardware, paper or in other forms.

Whitepaper
A document specifying a detailed description of the cryptocurrency. A whitepaper specifies the processes of acquiring the currency, the technical specifications for mining and the expected growth of the currency. It is intended to convince investors of the success of the currency.